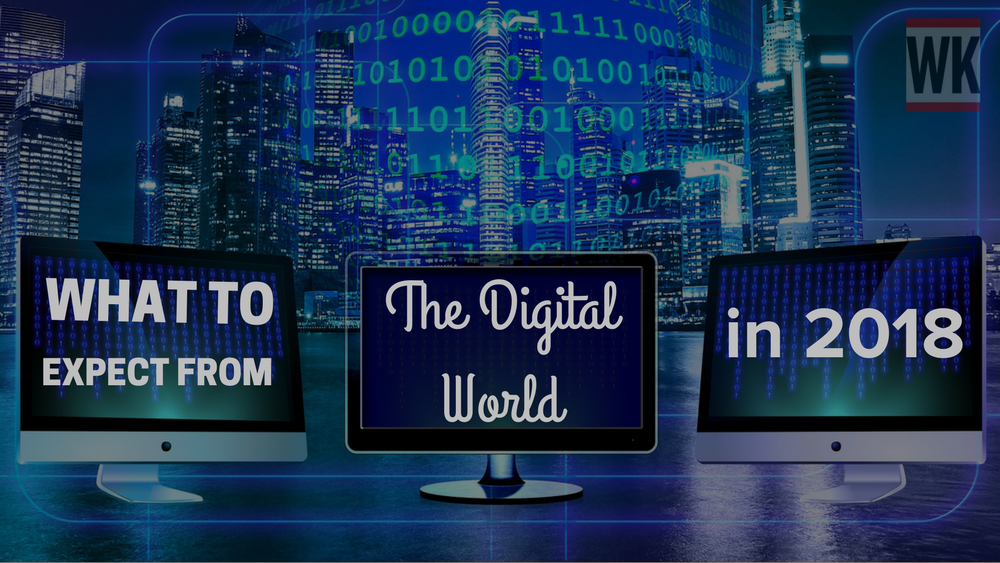 What To Expect From The Digital World In 2018

Did you know that there are now 4 billion people around the world using the internet?

That’s a lot of people. A lot of searches and a whole lot of online communication.

The beginning of a new year, for me, is all about understanding change. Add to that, what to expect over the coming months. We may be in February, but understanding the digital world in 2018, and looking at data is a great way to understand:

Thanks to We Are Social and Hootsuite’s Global Digital Report for 2018, I have all of the statistics I need and so can give you a better understanding of what to expect from the digital world in 2018.

A Global Overview Of Growth in  the Digital World

One of the most notable changes I found when looking at the data, was the digital growth from 2017 to 2018.

Internet usage will always increase year on year, but the statistic that stood out for me, and which shows a change in device popularity, is the active mobile social users. 360 million people have started using social media on their mobiles, rather than their other devices.

More than two-thirds of the world’s population now has a mobile. Most people now use a smartphone. The more smartphone users there are , the more mobile social users there are. This, therefore, equates to on-the-go communication being a huge trend for 2018. As the active number of internet users increased, you can see below how the percentage of total population using the internet changed. As a consequence, mobile users also increased. It’s not just the number of people using the internet that has increased this year, the amount of time that people spend on the internet has also gone up over the past 12 months.

When looking at the 6 hours a day being used by the 4 billion internet users, that’s a staggering 1 billion years online in 2018.

A new record: almost 1 million people started using Social Media for the first time, every single day over the past year. That’s more than 11 new users every single second. As part of the growth in social media, we are seeing larger numbers of older users joining social media too. On Facebook alone, the number of users aged 65 and above has increased by almost 20 percent in the past 12 months.

When it comes to Facebook, the growth is still continuing and the platform still dominates the social network landscape. Facebook’s monthly active users has surpassed the 2 billion mark, and 88% of users are accessing Facebook via their mobile device. Whenever I write a new piece of content about latest trends, or what to expect in the digital world in 2018, there is one thing I always talk about and that is video.

Did you know that 43% of people want to see more video content from marketers? Or that 51.9% of marketing professionals worldwide name video as the type of content with the best ROI?

I had personally experimented with video marketing throughout 2017 with YouTube, and paid advertisement, and saw great results. I know that some of the social networks have big things in store for 2018 when looking at Video, and the below statistic proves this.

Engagement rates around different types of content shows that to get the highest engagement rate, you should be using video. Coming in second is pictures, followed by a generic page post. Instagram managed to claim Facebook Inc.’s standout growth story over the past 12 months, with the number of global users up by a 30%. #1: Organic Reach Will Continue To Fall

For Facebook in particular, the organic reach and engagement has dropped by 10%. This is based on the Facebook algorithm changes, and also because of the rise of paid advertisement. As I have mentioned through this piece of content, mobile is crucial and even Mobile data connections are getting faster all over the world.

#3: E-Commerce Spend Is On The Rise

The e-commerce market for consumer good is on the rise, and the total annual spend is increasing year on year. To see the full 153-slide data and statistical findings, see below.

What was the most surprising statistic for you, and what do you think is going to be the biggest digital trend for 2018?

Digital in 2018 Global Overview from We Are Social